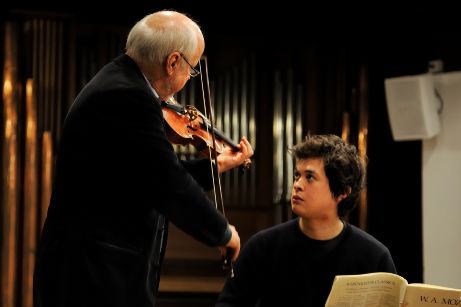 Since 30 years, ProQuartet has contributed to the influence of the string quartet, supported the entire chamber music community, and expanded the audiences that are interested in it.

ProQuartet program of young French and foreign ensembles, both in emblematic heritage sites (Château de Lourmarin, Orangery Museum, Town Hall of the 4th arrondissement of Paris), and in rural areas (south Seine-et-Marne, Provence, Limousin), promoting their professional insertion and allowing the transmission to a renewed public of the classical and contemporary repertoire.

Training institution, ProQuartet encourages and supports the vocation of young ensembles in search of an ideal of rigor and musical integrity, based on the idea of ​​filiation and transmission of the grand masters.

A large part of ProQuartet's musical programming is devoted to music creation and innovation : commissions for new works, first world or French audition, exhumation of forgotten repertoires ... In this, the association contributes to the enlargement and development of the repertoire of chamber music.

Attentive to actions in favor of sensitization to listening and to musical practice, the association aims to make music alive and accessible to all by developing an educational policy aimed at the prevented and remote public.